OK...so I didn't get back here as soon as I had hoped...sadly, my Mum passed away 2 days after my last post.

She had been very unwell for the past few months....a consequence of a fall in early May....but she had been struggling with Parkinson's Disease for the past 6 years. This had impacted her mobility, which was so hard for me to watch as she was such an active lady, and in the past few years her cognitive functioning had deteriorated too.
I was there when she died....by a bit of a fluke chance...although I kind of like to think she maybe waited for me to arrive before she went, as she went only 5 minutes after me sitting down with her. So the last week and a half has been a blur of phone calls, funeral arrangements, lawyers visits etc....and I had to fit going back to work in there too. 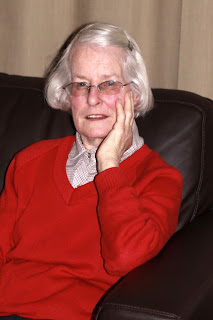 I will miss her terribly, but it is comforting to know she is no longer in pain or struggling to move.  RIP Mum.

I have been feeling very tired but I'm hoping I am coming right now. For me, this time brings back lots of difficult feelings and memories, of the death of our son (9.5 yrs ago when he was nearly 10 years old) and we have since also lost my day (in 2006) and Steve's Mum (in 2008)..I know...I need to just take it slow and look after myself...easy to say but a bit harder to do!!!

So today I'm off to a friends to do some scrapbooking....I'm going to try and finish an album I have been doing about the renovations my son and his wife did on their house when they first bought it, about 4 years ago....it's on the market now so it's timely to get it done. I will try and post some pics of my scrapping....

So....hellooooo....it's me here..... ...there seems to be an echo...... I haven't blogged for 3 years and 12 days and tonight I just feel like starting again....because I can...because I miss being able to flick back and read some of the hum drum that is life ticking by...so I'm going to pop in here and post occasionally....not to keep in touch with people (I can do that of Facebook) but to record stuff.... I'm a bit out of practice, so if there is anything I need to know about privacy settings and the such like (I really don't want a new man friend from Utah or Manchester or Chile lol)...and anyone who reads this would like to tell me what to watch out for....I would appreciate it... Otherwise my plan is to pop in occasionally and record what's going on chez moi...in my little corner of the world....just for me....and anyone else who might fancy a bit of an 'ordinary life' read.... Tonight I am cold...like chilled to the bone cold...so I have turned the leccy blankie on and I may take a warming dip in the spa before bed....tomorrow I have a new group I am starting at work in the morning and my first infant observation visit for my first Post Grad paper (bubs is just under a week old...I have to stay "removed"...that'll be interesting)...so I will be sitting at this computer writing it up tomorrow night...or should be at least..... OK...there's a start....will check back in in a day or two... Ciao Sandra
Posted by Sandra at 9:14 PM No comments:

Sandra
I am 51 yrs old and married to Steve for 30 yrs. I am Mum to 4 sons - 25, 23, 20 and "19", Mother-in law to my eldest son's beautiful wife and Nana to their fabulous daughter (5) and son (3) Our "19" yr old lives in heaven as we sadly lost him in a drowning accident 9 years ago. I work fulltime and I'm also a Stampin' Up demonstrator. When I can I am slowly working on scrapping all my photos that I have collected over the years. I feel like there aren't enough now but it's too late to change that.

Some of my Layouts